Russell impresses but Mumbai hit back 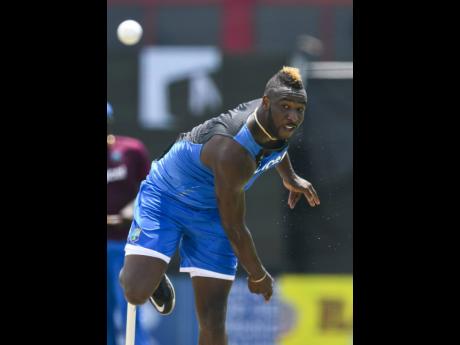 West Indies all-rounder Andre Russell snatched his first ever five-wicket haul in Twenty20s but then failed again with the bat, as Kolkata Knight Riders botched a straightforward run chase to slump to a 10-run loss to Kieron Pollard’s Mumbai Indians on Tuesday.

Entering the attack in the 18th over with Mumbai already struggling on 125 for five at the MA Chidambaram Stadium, the 32-year-old Russell picked up the last five wickets of the innings to reduce the visitors to 153 all out off exactly 20 overs.

He finished with five for 15 from two overs, wrecking an innings that had been given a decent start by Suryakumar Yadav, who top-scored with 56 off 36 deliveries at number three and opener Rohit Sharma who blasted 43 off 32 deliveries.

In reply, Russell was short of double figures for the second straight outing, dismissed for nine as KKR could only muster 142 for seven off their required overs.

Nitish Rana top-scored with 57 off 47 balls in a 72-run first-wicket stand with Shubman Gill who made 33 from 24 deliveries, but the innings stalled with the introduction of 21-year-old leg-spinner Rahul Chahar who claimed four for 27 to nip Russell for Man-of-the-Match honours.

The defeat was the first for KKR after winning their opener against Jason Holder’s Sunrisers Hyderabad three days ago while the victory was the first one for Mumbai after losing to Royal Challengers Bangalore five days ago in the season opener.

Sent in, Mumbai lost South African Quinton de Kock cheaply for two in the second over but Suryakumar entertained with seven fours and two sixes while Rohit counted three fours and a six, the pair posting 76 for the second wicket to rebuild the innings.

Australia fast bowler Pat Cummins (2-24) then engineered a slide which saw four wickets tumble for 37 runs in the space of 35 balls, before Russell followed up with his well-timed burst.

He accounted for Pollard with just his second ball, the Windies white ball skipper driving at a wide full length delivery and edging behind to depart for five, and then followed up with a wicket off the very next ball when Marco Jansen picked out deep cover.

In the final over, Russell removed Krunal Pandya (15) with the third delivery, caught at short fine leg and found himself on another hat-trick when Jasprit Bumrah holed out to deep square without scoring.

Though the hat-trick was averted, Chahar found the fielder at deep midwicket off the final ball of the innings.

On 97 for two in reply at the end of the 12th over, the odds appeared firmly in KKR’s favour but the last eight overs yielded a mere 45 runs as Chahar and left-arm pacer Trent Boult (2-27) hurt the innings.

Russell arrived at number seven and spent 15 balls over seven before getting a leading edge back to Boult in the final over with 13 runs required from four balls.