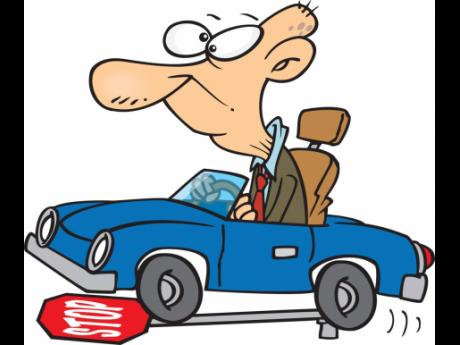 That was Danny’s response to my question why he had dropped out of the driver education classes which had been organised by Patrick Sterling and myself in Parade Gardens to help unattached young men to get a much-desired skill and a better chance in a skinny job market.

“My hustling mash up if I have to come to all the classes,” he reasoned. “Dads, jus gimme 20 grand and me will get thru. Doan worry yuself, so everybody dweet,” he reassured me knowingly.

When last he checked me, Danny had easily and quickly bought a general licence and thankfully was weaponising a Probox taxi rather than the 18wheeler to which he aspired. On a good day, he could pocket three to four grand for himself, after giving the ‘loader men’ at Papine and Half-Way Tree a money, buying gas ,and giving the owner lady, who works in a bank, her tax, amouting to nearly triple the amount the loan, likkle insurance, repairs and depreciation was costing her.

Two things were bothering him, though. One was the ever-increasing price of gas, so he had an arrangement with a guy down West, who has a ‘points’ at both the bus and petroleum terminal and can sell 89 for a ‘bills’. The other is the ridiculous fare tariff which bears no relation to the real costs of operation. He deals with that one by shortening his route or squashing in an additional passenger or two.

There are thousands of Dannys holding sway on our roads. “Allow dem, lawyer man, you no see dem help people! When I use JUTC, the nearest the bus would carry me was to Heroes Circle, and I would have to walk with load, or in dark night, from there to Arnold Road. Now, Danny carry me right to my gate and if I don’t have the fare, he will ‘trus’ me till Friday.”

Informality and corruption serve their purpose, after all. Law and order become subservient. Chaos and carnage are the consequences. The road rage and confusion are now beyond the remedy of the police, the courts, the well-meaning but powerless Road Safety Council, and the culpably passive motor insurance industry. Self-interest rules at every juncture.

Disorder has become the norm. We have made it so. This is worse than it was in the 1980s with the patty-pan culture. Countless road licences have become available and, with legendary Jamaican working-class ingenuity, a new industry has developed, a ‘little tradition’ – legitimised hustling – which now has a life of its own.

It will be the salvation as well as the death of us. And it has spawned many supporters. Which operator is not grateful to Bobby and Andrew for ‘flying the gate’ of the transport sector? They have made it into a free-for-all. Think of the vast network of untaxable income available to police, Aunty Roachy in the diaspora, loader men, the used car industry, insurance companies, the financial sector and many, many more. Big turn-over in this sector! Too big and too political sensitive to trouble, the governors say.

Don’t ask for a national public transportation plan. We have one. This is it. Indiscipline and ‘bly’ have become cornerstones of prosperity. The ‘new’ Road Traffic Act is obsolete even before coming into force. Just continue to wring your hands at the increasing bloodstains on the road, the intolerable burden on the healthcare system, the lost productivity, and the escalating billions we will pay each year until God comes to cover the losses of the Jamaica Urban Transit Co.

The highway minibus which crashed recently, killing so many, probably had never been to the depot to pass a fitness test. And what kind of insurance cover did it have? A version of the old act policy is still available. It is still not resolved whether a 16 year old child was the driver of last week’s debacle which cost four lives. It would not be unusual. As Danny said ,”Is so everybody dweet.”

So tragic, we say, and then do little or nothing about it. Because the disorder on our roads is emblematic of the moods and values impelling many of us. For after you have been ‘bad driven’ a few times with no recourse, it is reflexive to become a bad driver yourself.

LEARNING ON THE ROADS

And the children are watching everything and learning on the roads so much more than in the one-day-a-week, effective engagement which they are getting in the classrooms.

We need to build a culture of restraint, respect and order– to place the principle of the common good as the hub of personal behaviour, as well as all public policy.

If we want to save lives and limbs on the roads, start by introducing comprehensive driver education for all school-leavers. I hope Minister Williams’ recent announcement will stick. (When I had proposed it to HEART six years ago, it was met with polite silence.) Use technology to verify the honest testing of applicants. Mandate re-education for road offences and require re-testing of all operators every 10 years.

Until we do these and other practical and affordable things, most will conclude that Danny is right as to how the runnings go. He and his kind have won. We, with our outriders, sirens and immunity from traffic laws, have aided and abetted them.

And we haven’t even begun to confront the motorcycle culture yet. Till then, anyone who can should purchase personal injury insurance, because if you are hurt or suffer loss, the law and the courts are unlikely be able to help you anytime soon. What about adding such cover as a rider (pun intended) to the National Insurance Scheme?